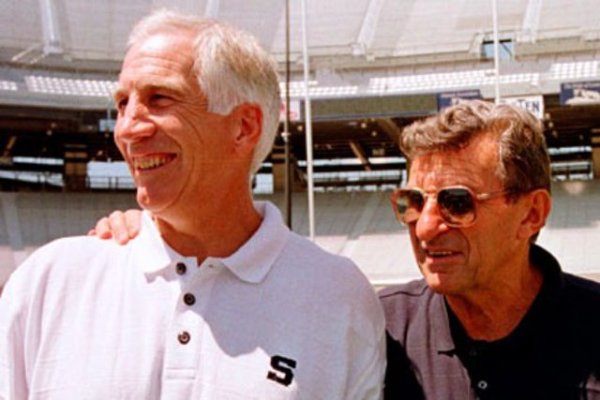 I think it might finally be time. It’s been almost five months since the story broke, and I’ve often considered what I might say when I finally began writing. I wanted to allow time for the facts to come to light… to give every benefit of the doubt.

It’s been two months since Joe Paterno died. The legendary Hall of Fame Penn State football coach of nearly 46 years with 409 wins and 5 undefeated teams died of lung cancer amidst scandal and controversy. The questions I’ve pondered over and flip-flopped on these past months have been: “What is Joe Paterno’s legacy?” and “Does the good out weigh the bad?”

I saw a recent quote that read: “Integrity is not a 90 percent thing, not a 95 percent thing; either you have it or you don’t.”

That seems pretty harsh when applied to Joe Pa’s situation, but the fact that Joe spent decades coaching and teaching young people about doing things the “right way” to mess up in one very big way only further proves this statement true.

Joe Pa and Penn State apologists can argue ‘til they are blue in the face that Joe fulfilled every “legal” requirement in reporting what he knew to the “proper” authorities. They can argue that Joe was shielded from the full extent of what Mike McQueary had seen and heard happening with Sandusky and a 10 year-old boy in the locker-room showers, that out of respect for the elderly Paterno, he wasn’t told about the graphic nature of the sexual abuse. But let’s be real. If you are more concerned about old Joe’s reputation and feelings than the irreparable damage done and lives forever changed by being assaulted by Gary Sandusky, you better check yourself. This was an act, or rather inaction, of complete moral failure on the part of Joe Paterno for which his legacy will rightly be forever tarnished.

The apologists who argue Joe was too fragile to properly and competently handle this situation are the same who will also argue he was completely competent and capable of continuing to steer the course of the multi-million dollar franchise that is Penn State Football. You can’t have it both ways. Either he had no business coaching and should have had the humility and dignity to step down when asked years earlier, or he was culpable and bore a degree of responsibility for failing to protect children from a known pedophile.

So at the end of his career (and coincidentally his life) was Joe Paterno just an incompetent and ignorant old man, or was he still a strong leader with conviction who chose to look the other way and shirk responsibility in what happened to be a defining moment of weakness and disgrace? It’s one or the other. Taken to the extreme, was Paterno an inept relic past his prime or a skilled motivator enabling a rapist? What say you?

Wisdom would have us learn a valuable lesson about integrity and character from a great man who had more influence than you or I will ever have and made a mistake bigger than we will likely ever make.

Update: I don’t want to take anything away from the massive good that Joe Paterno did for countless people. He deserved credit for all the good, but he was also responsible for the bad.