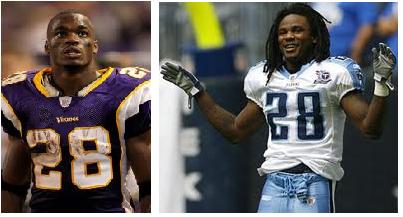 This is the dilemma I face tomorrow. Adrian Peterson or Chris Johnson?

So what’s the problem you ask? I’m drew the number one draft slot, and I’m still not sure which premier running back to choose.

On one hand there is a clean cut, hard working guy that keeps his head down and his mouth shut. His teammates love him, and the fans worship him. (He also happens to hail from my wife’s home state.) On the other hand, there is a prima donna who stirs up controversy and drama, who talks a big game, only sometimes delivers and holds a team hostage thinking he’s worth tens of millions of dollars more than he deserves.

Guess that wasn’t so hard after all.

Thumbs up or thumbs down?